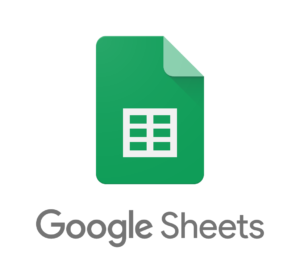 Built-in pre-formatted ready-to-use templates. The Statistical Sheets (SS) are a set of the 3 reports that can be produced on the fly in less than 10 seconds (and depending how fast is you access to your database). 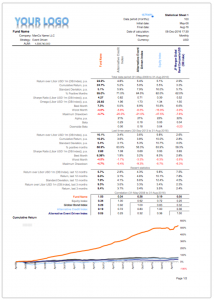 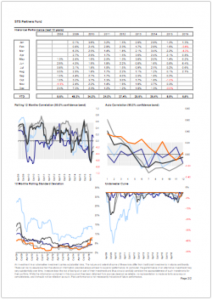 SS1: This is an executive summary of a fund’s track record. It shows the performance of the selected fund along with 4 optional benchmarks. Key metrics are grouped in 3 different time windows: Total period, last 3 years and recent statistics where the last 12 months are shown.

This is followed by a small correlation matrix follows with a VAMI chart. VAMI stands for value added monthly indicator, that is the cumulative value an investor gets when invests in the fund.

In the second page includes a performance table, showing monthly performance numbers and YTD totals, together with a set of four charts: Rolling monthly correlation against the benchmarks, autocorrelation for different time windows to see seasonality and Level 3 assets, standard deviation and underwater curve. 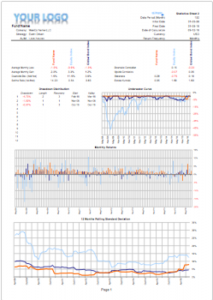 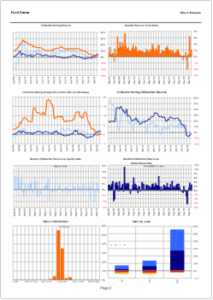 SS2: This report is an extension of the the SS1. It shows differs views of the performance track record of the fund against 2 selected benchmarks. the first page shows a more deepen view of the underwater curve, monthly returns over time, and a 12 months rolling standard deviation chart.

The last page shows a scatter plot with a regression line for the fund against each of the selected benchmarks in which is easy to visualise the correlation between time series. A fitting equation, together with a squared-R results are also included.

Below includes charts depicting 12 months rolling betas and correlations to the selected benchmarks. 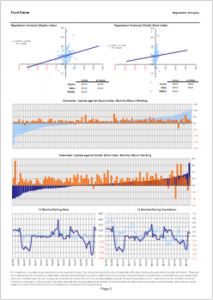 Rapid Application Development (RAD), Agile Development, and Scrum, have been major topics in the front offices of large and medium size companies worldwide. The urgent need of having an application working ASAP have put Excel as the main tool at hand.  Excel facilitates the work because it is a flexible and familiar user interface. Excel can perform calculations, format text, and display charts natively. However, the connection to databases have been an obscure part of it. Mostly solved via a Data Connection Object, which is complicated and difficult to share with colleagues or using a VBA macro, that despite being effective, not always perform as fast and robustly as desired.

At qUtopic we know these issues because we have been dealing with them for many years. Our answer are the qUtopic functions. A set of database querying functions encapsulated in an XLL Add-in coded in C++.

From Wikipedia, the free encyclopedia
ODBC

In computing, ODBC (Open Database Connectivity) is a standard programming language middleware API for accessing database management systems (DBMS). The designers of ODBC aimed to make it independent of database systems and operating systems; an application written using ODBC can be ported to other platforms, both on the client and server side, with few changes to the data access code.

ODBC accomplishes DBMS independence by using an ODBC driver as a translation layer between the application and the DBMS. The application uses ODBC functions through an ODBC driver manager with which it is linked, and the driver passes the query to the DBMS. An ODBC driver can be thought of as analogous to a printer or other driver, providing a standard set of functions for the application to use, and implementing DBMS-specific functionality. An application that can use ODBC is referred to as “ODBC-compliant”. Any ODBC-compliant application can access any DBMS for which a driver is installed. Drivers exist for all major DBMSs, many other data sources like address book systems and Microsoft Excel, and even for text or CSV files.

ODBC was originally developed by Microsoft during the early 1990s, and became the basis for the Call Level Interface (CLI) standardized by SQL Access Group in the Unix and mainframe world. ODBC retained a number of features that were removed as part of the CLI effort. Full ODBC was later ported back to those platforms, and became a de facto standard considerably better known than CLI. The CLI remains similar to ODBC, and applications can be ported from one platform to the other with few changes.

Most commonly used ODBC connection strings
We suggest using the following string when connecting to a local database (for example SQL Express or MS Access running in the final user’s machine):

When connection to a networked SQL server within company:

When connecting to Azure SQL Server:

When connected to a web hosted MySQL database:

* Driver need to be downloaded from here.

You can also find a variety of ODBC strings at this great useful website www.ConnectionStrings.com. 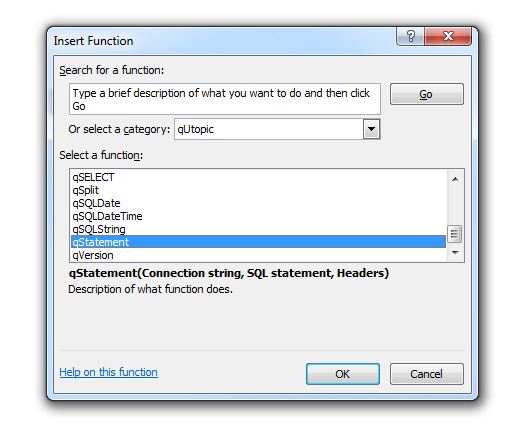 Use the power of Excel functions to build rich and complex reports in minutes.

qUtopic delivers a set of functions that enable power users to extract pieces of data right to the places where are needed. No more intermediary Query Tables, expensive VLOOKUPS, and extra Sheets.

Every function is fully documented and expanded with constant updates online. 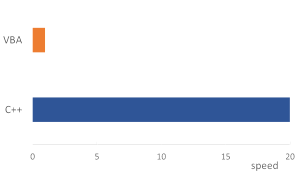 Runs up to 20 times faster than conventional VBA code. qUtopic.xll™ has been coded in fully portable C++, with no dependencies on .NET, that makes it very light and extremely fast.

Excel interprets VBA code in real time every time it runs. An XLL is an add-in precompiled in a language with a very modest overhead. Only the libraries used are included. However, qUtopic is the ideal companion to increase speed and portability of your VBA project.

An XLL is not macro but a compiled add-in, so once after installation, it doesn’t require the user to change settings or give approval every time is used.

XLL technology has been available for decades with a prominent use in trading floors with strong quantitative requirements. 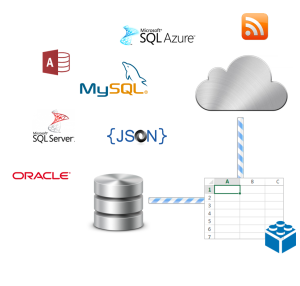 With qUtopic.xll you can connect your spreadsheet to any database via ODBC using functions. That includes SQL Azure™, which is SQL in the cloud, Oracle®, MySQL™, MS Access®, and website data in many formats. We are continuously developing our product to easily include all popular sources.

You can request data from multiple data sources in a single spreadsheet as long you know your connections string and have the adequate clearance. No need to create a connection file. 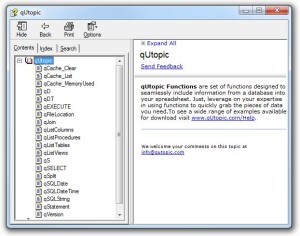 Each function is fully documented and seamlessly integrated with Excel. Just hit F1 and you will be brought the requested topic.

Additionally, qUtopic hosts an online forum where matters are discussed more in detail and new examples and templates are posted constantly.